The Gobsmasha is a classic orky design. That big boxy body, huge gun and clunky manufacture all scream ORKS. However I've never liked the big wheels. Also, I've always loved Leman Russes without turrets. They just look so primative, so much like Mk I tanks or something of a similar vintage. Hence, when it came to designing my basic Russes for my Armoured Company, I decided that a Gobsmasha with Russ tracks would be my archetype.

A trip to my local GW store saw me leave laden down with different tank models! At home, out came the hacksaw. Hulls were mounted on the wrong tracks, things were mounted backwards, everything was mixed up. The big guns are all plastic plumbing pipe with copper pipe connector bits as the muzzles.

After the kitbashing of the main tank, lots of plasticard patches were stuck on to make it look a bit more orky. Attached with really big rivets, which are actually tacks...

Then heavy battle-damage was added with an old engraving tool, modelling knives and pin vices.

Here's the first 3, which are at the most advanced stage of completion. There's not finished yet, they're are very much Painting In Progress. These guys will be part of the "Tall'un Dessert Raiders". There are still a big pile of other tanks in less complete states that need to be finished to complete my Spearhead!

Painting was spray black-> lots of Deneb Stone-> drybrush Skull White. Red bits are Blood Red, metal bits are Boltgun Metal, battle damage & paint chips are Tin Bitz. Then I liberally added Flesh Wash all over. I still need to go back over lots of details, cover them in mud, and add the crew.

From left to right they're made from:
A basilisk's hull mated with leman russ tracks, plus an engine made from an old scorcha fuel tank.
The front of a chimera with a leman russ front as the back, on rhino tracks.
A mix of classic and current rhino parts, on leman russ tracks. 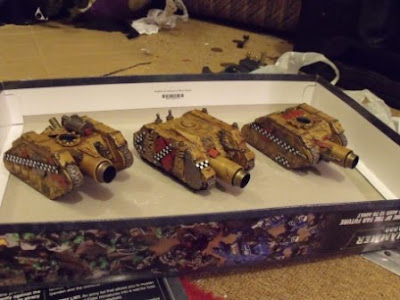 I'm an avid converter who's been collecting 40k since 2nd ed and has just branched out into historical wargames. I also do Viking Age re-enactment and ran a Jane Austen vs Genestealer LARP...